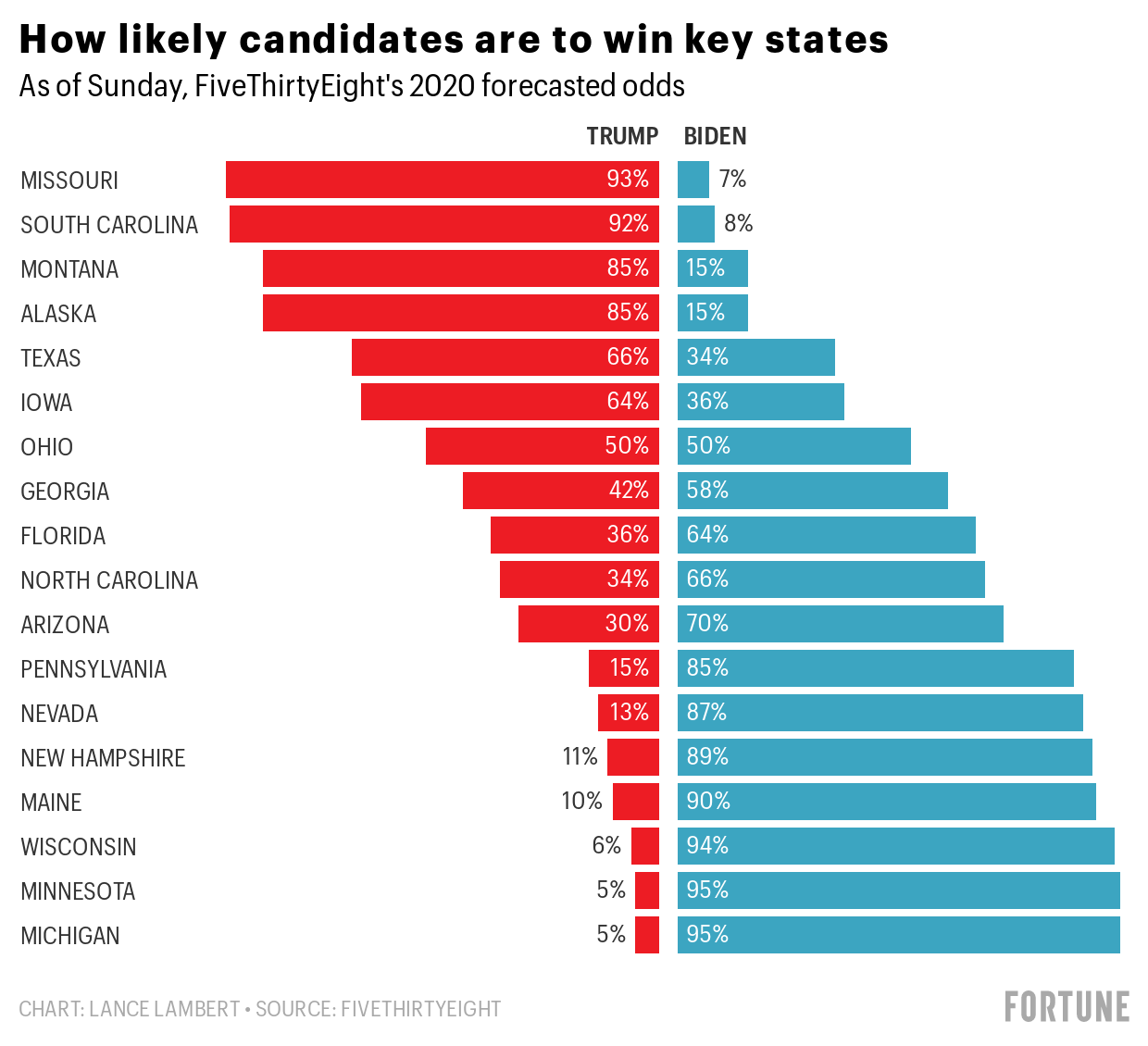 Our mission to help you navigate the new normal is fueled by subscribers. To enjoy unlimited access to our journalism, subscribe today.

If you ask pollsters, they’ll tell you President Donald Trump’s path to reelection is both narrow and unlikely. As of Sunday, FiveThirtyEight gives Democratic nominee Biden a 89% chance of winning—compared to the 71% odds it gave Hillary Clinton in 2016.

The President does have a path if he can pull off upsets in a handful of states Biden is the favorite in, according to FiveThirtyEight. That includes Georgia (58%), Florida (64%), North Carolina (66%), Arizona (70%), and Pennsylvania (85%). Trump would also need to win everywhere he’s currently leading.

The hardest upset to pull off is Pennsylvania, where Trump only has a 15% chance of winning. The odds of that are as likely as Biden pulling off upsets in several deep red states. Biden’s odds of winning Montana (15%) and Alaska (15%) are about the same as Trump’s chances in Pennsylvania. And they’re greater than Trump’s chances of taking Michigan (5%) or Wisconsin (6%)—both states the Republican won four years ago by slim margins.

If Biden pulled off upsets everywhere he has at least a 15% chance of winning, he’d win in a 419 to 119 electoral vote landslide—a haul greater than any candidate since George H. W. Bush’s 426 electoral votes in 1988.

Simply put: A Trump win is as likely as a massive Biden landslide.

Then again, FiveThirtyEight was wrong five years ago. In 2016, Nate Silver’s media outlet had Democratic nominee Hillary Clinton as the odds favorite in Florida (55%), Michigan (79%), North Carolina (56%), Pennsylvania (77%), and Wisconsin (84%). Trump would go on to pull off upsets in those five states and claim the White House.

And if 2020 sees the exact same polling errors that happened in 2016, Biden would win by a hefty margin.

More from Fortune’s special report on what business needs from the 2020 election: